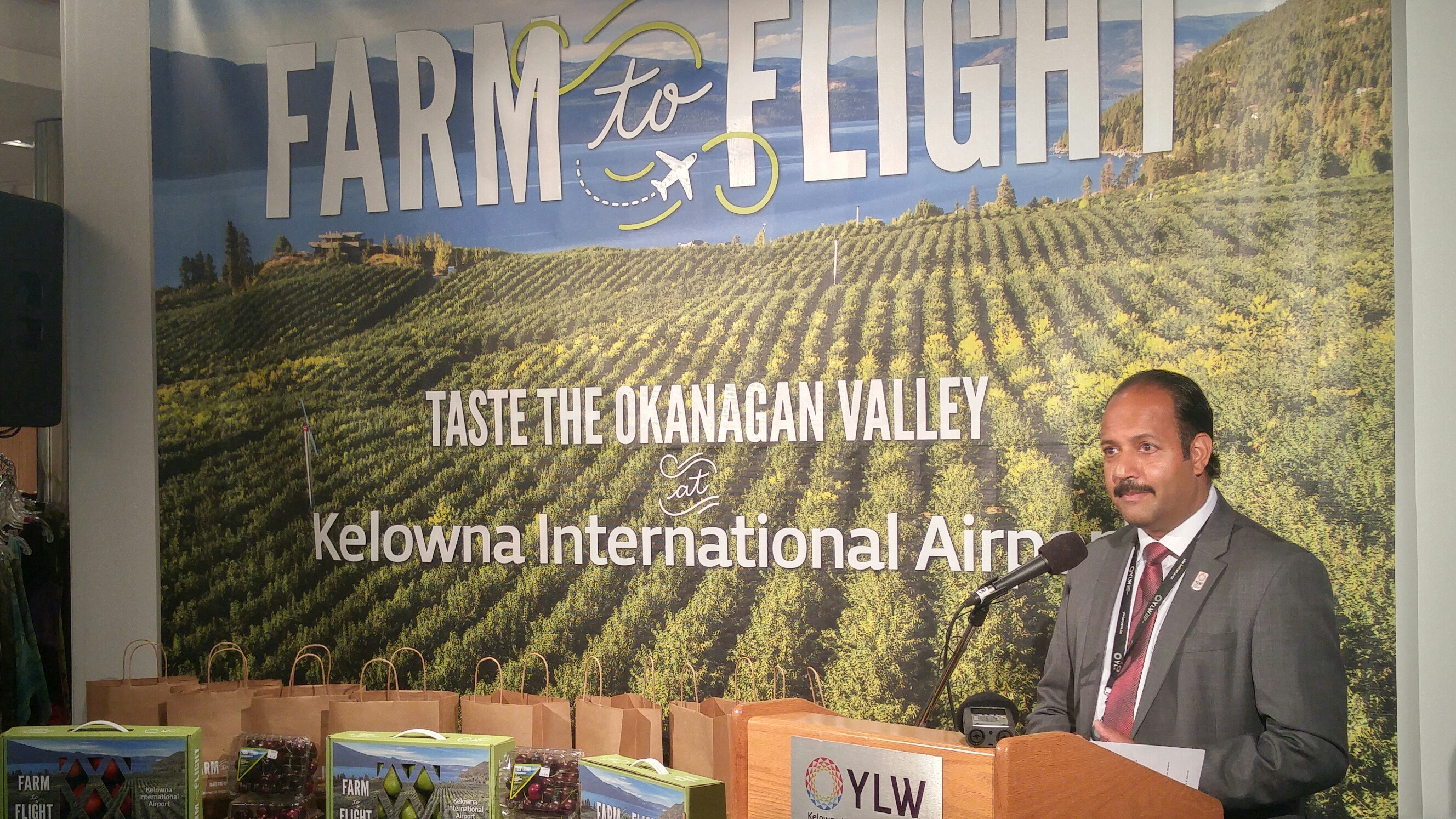 Those looking to take a taste of the Okanagan abroad will now have the opportunity to take in-season fruit on flights leaving from Kelowna International airport.

YLW’s Farm to Flight program allows Kelowna residents to show off the agricultural pride of the Okanagan to those across Canada, and lets tourists visiting the bountiful valley take their favourite tastes home with them.

The program was launched Wednesday in the departure lounge gift shop at the airport, where travellers can now purchase Okanagan cherries to take on their flight.

“Not only will Farm to Flight bring new opportunity and national reach for local farmers but it’ll bring awareness of Kelowna to tourist hubs all over the country,” said Kelowna city councillor Mohini Singh.

While cherries are the only fruit currently offered, peaches, nectarines, apples and pears will be offered as they come into season.

The fruit is supplied by De Simone Farms Ltd., a fruit grower and packer in Kelowna.

Pierre De Simone says while he doesn’t expect to see a huge bump in sales right off the bat, he has high hopes for the program's future.

“I think it’s going to step up significantly as we go along.”

Prices have yet to be set for the other fruits, as it will largely be determined by agricultural conditions, but Ed Wong, general manager of Skyway at YLW, says there could be a premium on the price to ensure food safety when crossing provincial borders.

The larger fruit will be sold in special briefcase-style boxes that fit underneath a plane’s seat, while protecting easily-bruised fruit. (Exerpt from Castanet News)

Its Bike to Work and School week again - and the sun is shining! Kicking off the event at Landmark square in Kelowna is L-R: Mayor Colin Basran, Councillor Tracy Gray; Councillor Ryan Donn; and Councillor Luke Stack. Looking over my shoulder you will see our team leader at City Hall Jan Johnston. She is the organizer of our team "the Peddle Pushers." Thanks Jan!! (She rides her bike to work every day and inspires us all) 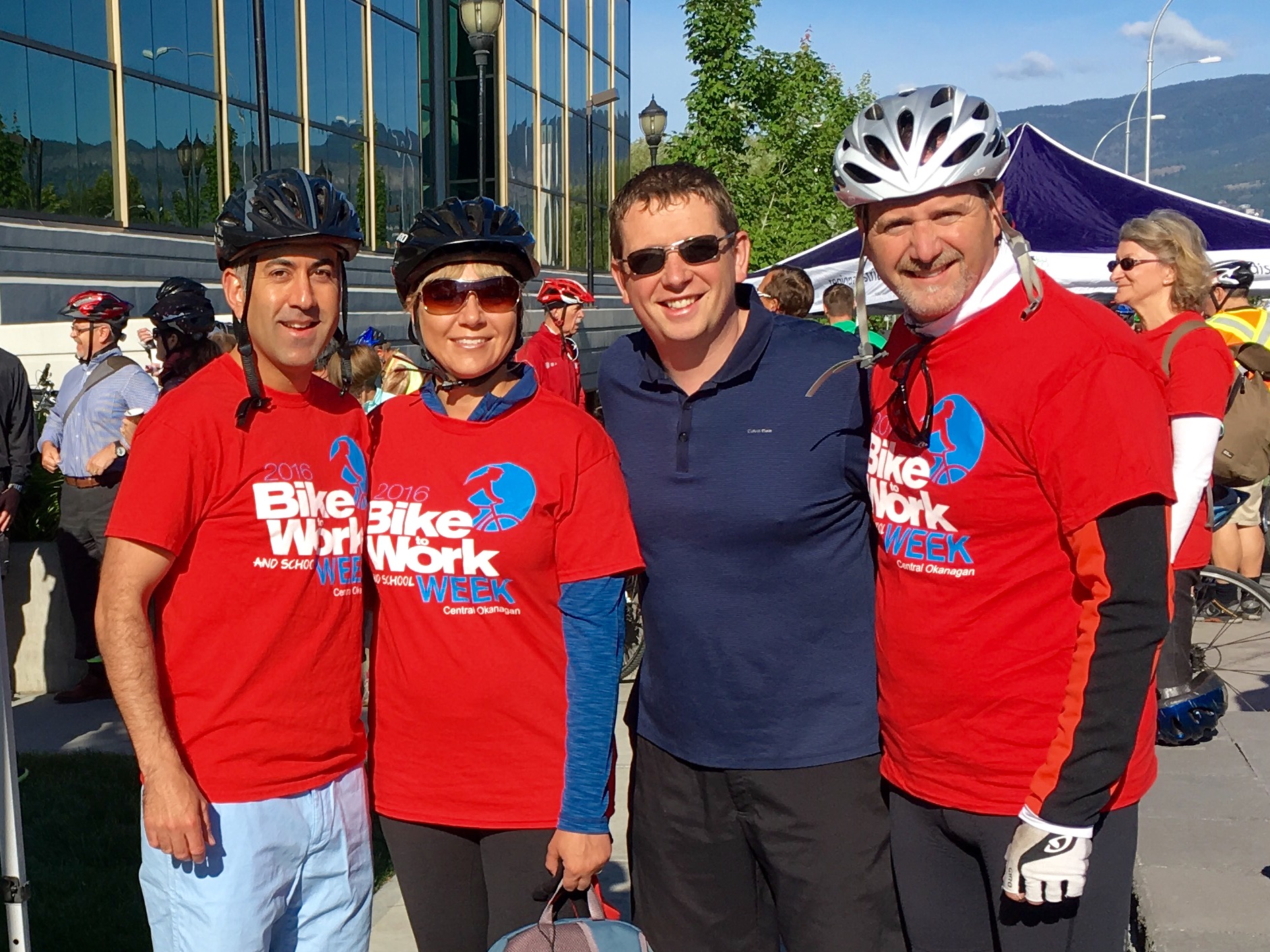 Hybrids continue to get a brake on parking 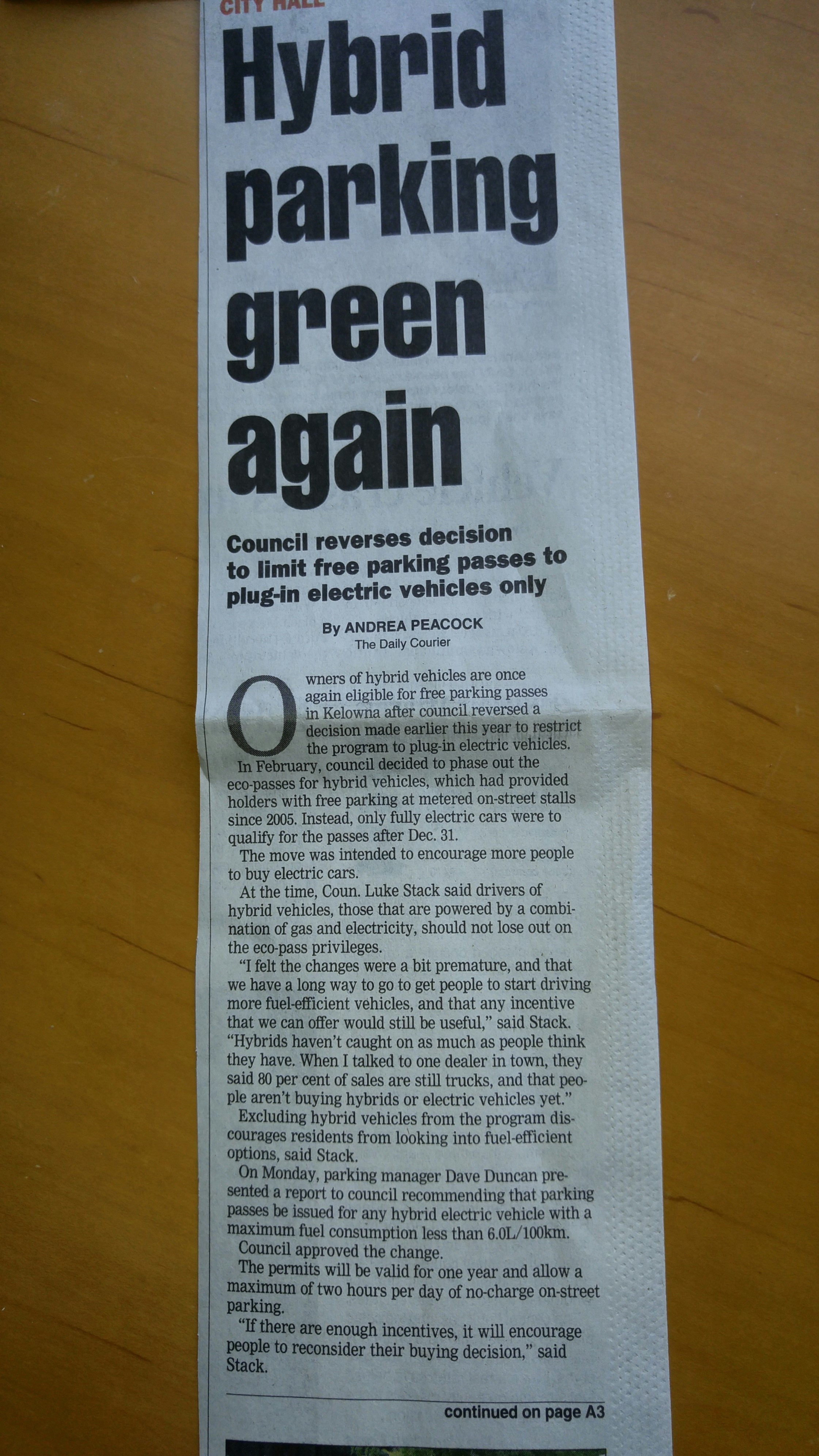 Chamber of Commerce Lunch with the Minister of National Defence

Harjit Singh Sajjan has served Canada and his community as both a soldier and a police officer. He continues his service to Canada as the Member of Parliament for Vancouver South and as Minister of National Defence. I had the honor of having lunch with the Minister when he was in Kelowna to attend a Chamber of Commerce meeting.

Harjit is a retired Lieutenant-Colonel in the Canadian Armed Forces and a combat veteran. He was deployed to Bosnia-Herzegovina and served three separate deployments to Kandahar, Afghanistan. Harjit has received numerous recognitions for his service, including the Meritorious Service Medal for reducing the Taliban’s influence in Kandahar Province. He is also a recipient of the Order of Military Merit, one of the military’s highest recognitions. Harjit also served as an Aide-de-Camp to the Lieutenant Governor of British Columbia.

Harjit was a police officer with the Vancouver Police Department for 11 years. He completed his last assignment as a Detective-Constable with the Gang Crime Unit specializing in organized crime. He proudly tackled gang violence and drug crimes in Vancouver. Harjit is also a human security specialist, and has lectured to a wide audience in both Canada and the United States. 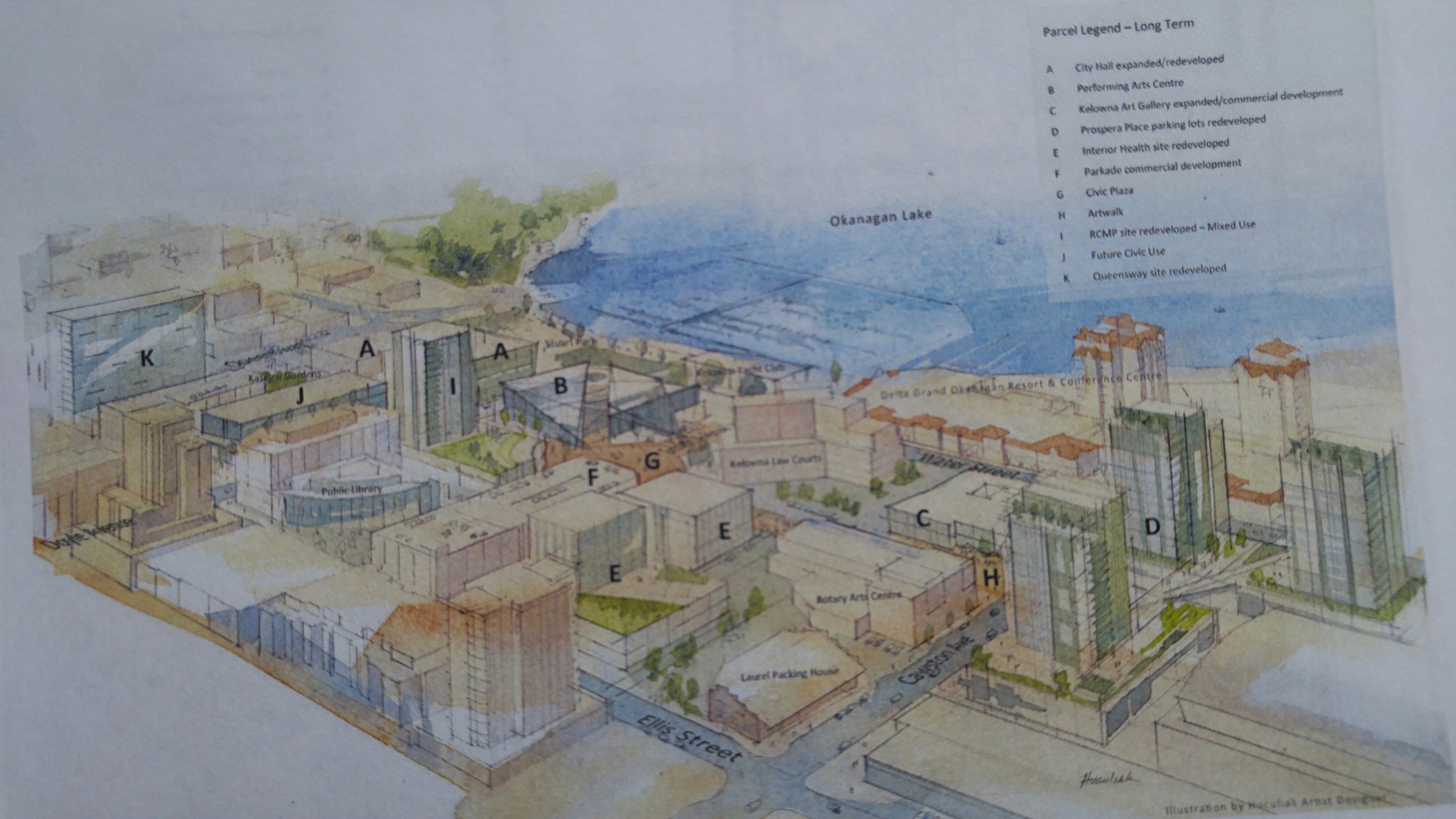 Kelowna's new plan for the possible future development of what it calls its Civic Block—an area of downtown bordered by Queensway, Clement, Ellis and Okanagan Lake—says the land currently housing the soon-to-be replaced RCMP detachment should be redeveloped with mixed use housing in a building as tall as 13 storeys high.

The recommendation is just one of a series in the proposed future land-use vision endorsed by city council Monday.

In addition to redeveloping the RCMP detachment site—being replaced by a larger, new police services building on Clement Avenue in the city's North End—other projects envisioned in the short-term (five to 10 years) include:

• Extending the existing Art Walk that runs between Cawston Avenue and the Library Parkade all the way to Queensway.

• Creating a civic Plaza on the walkway at the end of Smith Avenue.

• Redevelopment of the Memorial Arena for community use, possibly as the new home for the Kelowna Heritage Museum.

• Redevelopment of the existing museum site at Ellis and Queensway.

• Mixed-use development on the site of the existing health unit on Ellis Street.

The plan envisions up to 230 affordable housing units, 550 other housing units, an additional 75,000-square feet of commercial space and another 5.5 hectares of land for future civic use.

It would also give new mixed-use developments in the area a break on parking requirements. However, no new parkades would be built in the area, which already has the soon-to-be expanded library parkade and the new parkade beside Memorial Arena that is currently under construction.

For the most part, council members liked what they saw in the plan. Council voted to endorse it 5-2, with Couns. Brad Sieben and Charlie Hodge voting against. Couns. Tracy Gray and Gail Given were not at the meeting.

Water is this Council's #1 Priority

Ron Seymour's editorial pretty much says it all.... 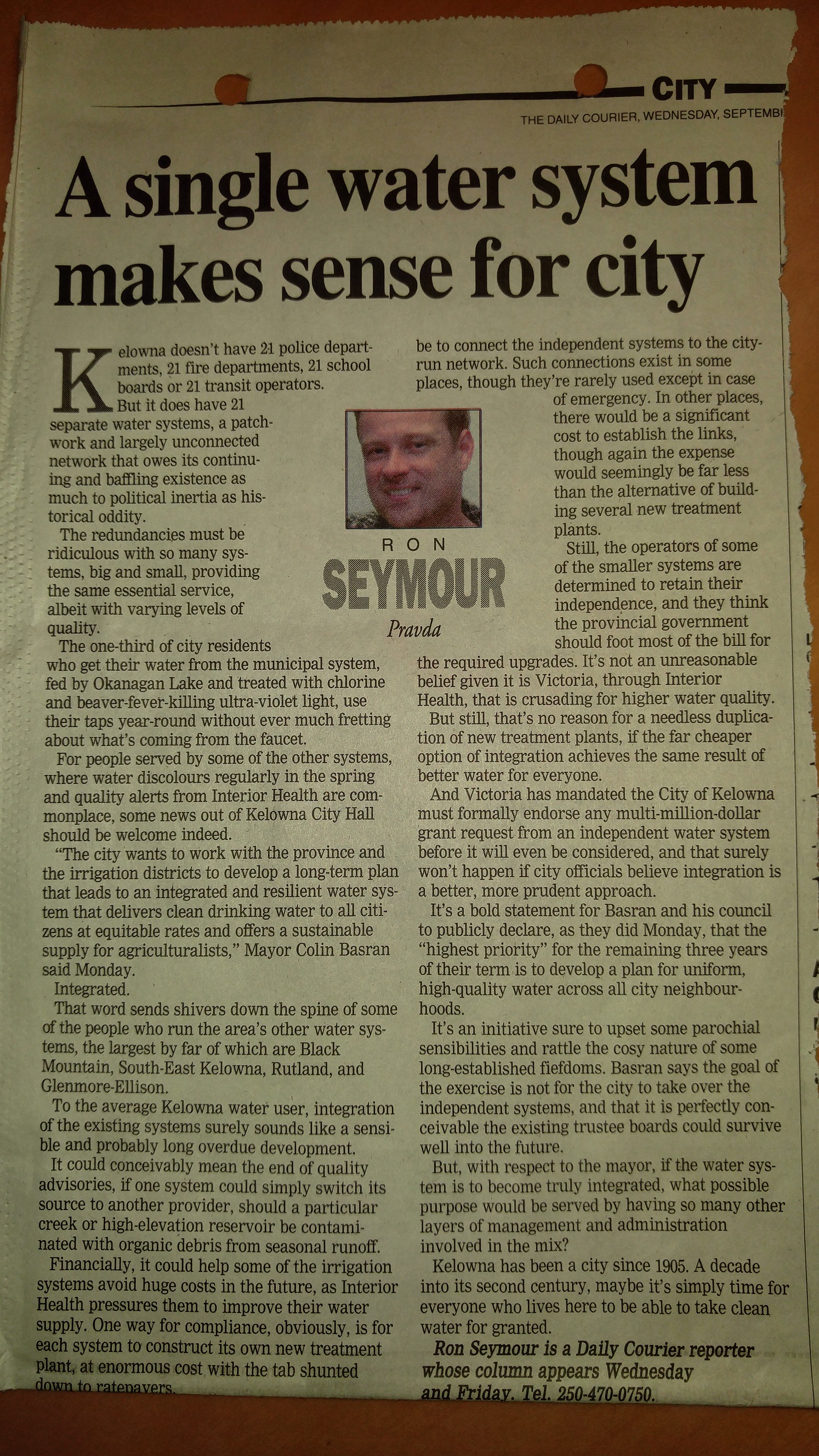